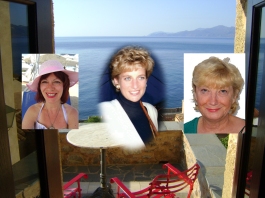 “We are going forward to take this planet into another dimension.”

Diana Spencer passed this day, August 31st, 1997. Anne Stewart (right in the picture) passed on August 22nd 2015. The impact of her passing was devastating. Apart from being my wife, friend and confidant, she was my business partner, healing workshop co-trainer and inspirer. Vanessa Stewart passed on August 23rd, 2019. I never met Diana on the earth plane. I was in dialogue with her for four years when Anne channelled her. Read In the Stillness, Everything Happens. Visit Anne’s You Tube Channel

I am a republican. So, in this dream world, the paths of Diana and I were never going to cross. But putting together Diana’s words, and having regular conversations with her from 2011 was an unbelievable experience. Billions around the world, were shocked and saddened by Diana’s death. But her legacy will never be forgotten.

I have to walk my talk. I cannot make this journey alone. A glance at many of my blog posts will tell you I have found another soul mate. She is as precious to me as life itself. My great friend and support Jay Atkinson tells me that Anne and Vanessa concur. How many miracles can one man take?

Below is a video of Anne channelling Diana in my favourite city, Athens (where else?), in 2013. “Remember, you did choose to be here…”