Let’s start and end with some good news. And I’ll resist the temptation to satirise and make fun of the current situation we find ourselves in.

I was going for my daily walk in the Malvern Hills and I walked past a row of shops all closed. However outside the local florist (Forget-me-Not) was a bucket containing two bunches of beautiful flowers. Strange? Have florists been given a dispensation to raise morale through the sale of beauty? In the bucket was a handwritten sign. “Free flowers, please take one.” So I did. I’d already arranged for flowers to be sent to my lady earlier today so I had no conscience in taking a bunch home and placing them on my window ledge. I tapped on the florist’s window, smiled and put my thumb up. She duly acknowledged. My heart sang.

As I walked up the road to access the footpath to the hills I noticed a number of people who were out. Smiles all round as we say hello to each other. 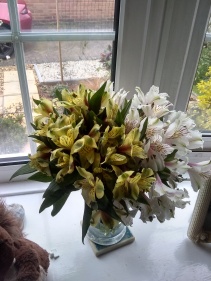 Despite the fact I’m reasonably fit, the closure of my local swimming pool and gym hasn’t helped. So although I can climb the hills, it takes it out of me more than it should. However practice makes perfect. So I stopped, out of breath. I had texted my lady about the florist episode and she immediately came to mind. As she does without any prompting. I then thought about the florist again. I thought about Alice Herz Sommer. You need to know this woman. Her mantra? Life is beautiful. It was cold today, windy and overcast. I looked at a huge tree and noticed buds were beginning to form. The smile on my face broadened, and I said out loud: “Life is indeed beautiful.”

I have mentioned the fact that I don’t use Facebook very much. Sometimes I find it difficult to resist. Donald Trump has never been other than on my list of idiots. A racist, misogynist buffoon. At least that’s what the mainstream have been feeding my subconscious for years. And because I have that view of Trump I pay attention both consciously and unconsciously of anything that reinforces that belief. What I have just said applies to how everyone constructs their reality.

In recent days it has come to my attention from my “go to” friend who has an encyclopaedic knowledge of cosmic and world “reality” that Trump may be more than he seems. And there is no doubt, none whatsoever, that the so-called “liberal” media in the USA have tried to destroy him. Before you proceed bear in mind I have been left-leaning all my life.

So I posted Incredible Trump 2020 Campaign Ad. Watch it, it may surprise you. Then one of my relatives in America, who I’ve never met, but I think she is fabulous, commented. It went something like this, shortened massively:

Me – Is it possible Trump’s critics have an agenda? The Clintons are murderers.

So you’ve fallen for the Clinton conspiracy theory?

I always thought you were a Trump sympathiser.

Love you Amy. Now I know Amy is infinitely more than this exchange, but the exchange touches upon a deep and profound truth. My worldview is that those who serve the system at the higher levels are corrupt. And everything that supports the system is also corrupt or at least corrupted. Amy has a different view, which I respect. But to completely close down any argument, however much merit it may have, all you have to do is label it.

From both the shadows and the limelight slowly emerging are spiritual teachers who have avoided the conspiracy theory curse. Some of you may be familiar with them; Gregg Braden, Bruce Lipton, and Joe Dispenza. There is much he says I would disagree with, but so what let’s throw in Sadhguru.

If you look at the history of Winston Churchill you will discover deeply unpleasant, truly appalling periods of his life before he became wartime leader. I have no doubt Trump has more than a few skeletons rattling around in his cupboard, but this is not a blog post to promote Trump.

If you were in dire straits and someone came to help, would you want to know their politics, if they were representative of a minority, and had “woke” views on transgender issues before you accepted their largesse? If you think I’m exaggerating look at what’s happening in certain (worryingly large) sections of American society.

People like me can spend decades reading, trawling the ‘net and watching “alternative” videos until the cows come home. But it is impossible, truly impossible, to avoid mainstream conditioning.

My lady and I have hugely differing political views. But at our core we both fundamentally reject the idea of a hierarchy with the Queen at the top and a homeless person at the bottom. I find her calmness, patience and open-mindedness almost addictive. For those who know me, I am spontaneous, impulsive, impatient and far too often very opinionated. I almost crave her qualities because they balance and ground me (God knows if she craves any of mine!). She has saved me and other people from myself on a number of occasions with her wisdom.

So, dear reader, I would exhort you to look behind (cui bono anyone?) what you are being told. We all know if someone is labelled a racist, misogynist, a conspiracy theorist, trans-phobic or any other “woke” term of abuse they are instantly dismissed. There is no quicker way in contemporary society to close someone down. As I am sure I have said many times it is incumbent upon us all to develop discernment. To know when we are being deceived, and to know when we discover or are being told the truth. I am 1 million miles from having this quality but it is my intention to develop it much further.

It would take you about five minutes to realise the statistics and other things being thrown at you at the moment about the virus are dubious to put it mildly.

I’m going to leave you with the incredibly reassuring thought (this is not a thought but a painstaking researched, scientifically validated argument) that humanity is not solely populated by toilet roll addicted, snarling and feral individuals. And if it is it is because they have been conditioned to be that. Gregg Braden, from his Missing Links series on Gaia,  discloses that archaeological findings from over 5000 years ago have proven the absence of any weapons, wars and mass graves. Remains of many of the communities which were excavated were found to have no walls. No evidence was found of mutilation. How interesting is it that we were told “civilisation” (wars, pandemics, fighting, mutilation, mass graves et cetera) began 5000 years ago. And yet a phase of human history from 5000 to 10,000 BC has yet to reveal evidence of the kind of daily diet we are served up by those who have hijacked the planet.

Another cycle, another era absent of war and suffering is ours for the taking.

In closing, my research and my contacts have suggested one of the possible routes to this return to paradise could well be linked to the misogynist, racist and thoroughly reprehensible Trump. Who knows? It is almost too incredible to contemplate.

But what I do know is this. Take any figure of any note from history (bearing in mind that history is written by the victors) and you will find if you are diligent and thorough enough that every one of these figures has a shadow side.

I have been exceptionally fortunate in my life to be involved with the healing of thousands of people. However I have had periods in my life when I have not been the most attractive human being you have ever met. Before you accuse me of anything, I have murdered nor deliberately attempted to harm no-one. I don’t think I have ever betrayed anybody, but I may have done. So use me as a metaphor. I reckon I’m a pretty decent person. If I had ever decided to appear on a world stage if my message ruffled too many feathers you can almost guarantee the inevitable media onslaught. And if you look back far enough into anyone’s past you can find “dirt”.

We do indeed live in the most incredible, depressing and exciting times. Hard though it may be, if you persist you will find love, compassion and all that you wish for for yourself, and your family and friends, and all sentient beings.

Hello, I'm Jack Stewart, Healer, Therapist, Author and someone who may open the door to the person you were born to be. View all posts by healerjack

One thought on “Q”